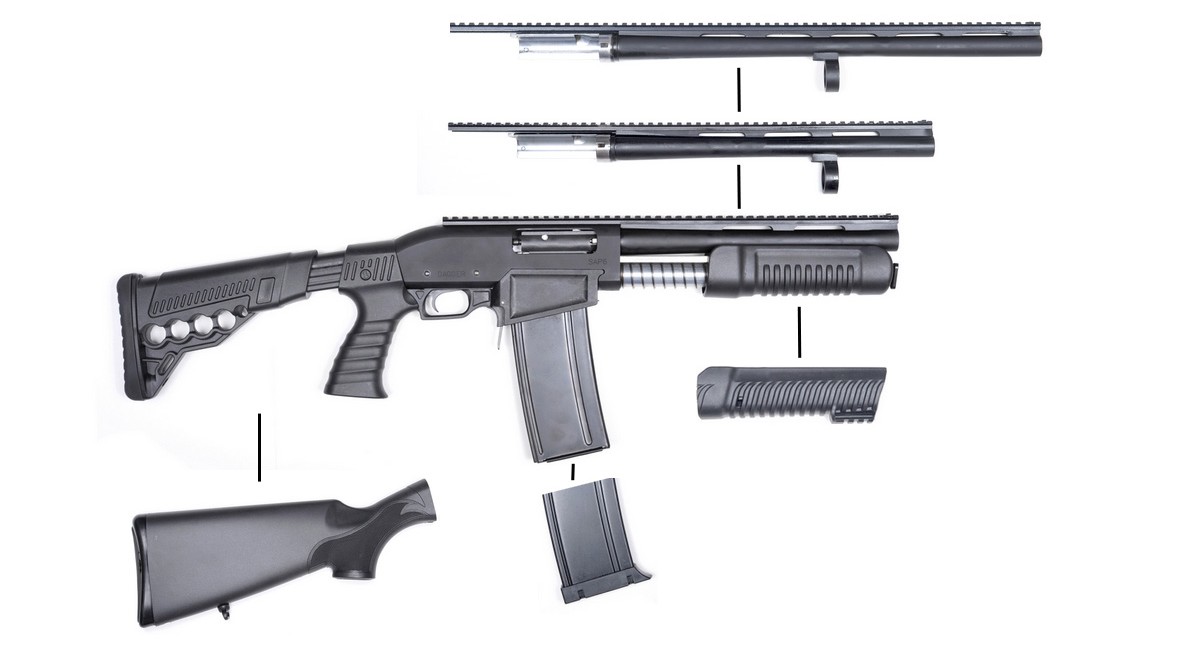 I was attracted to this shotgun because of a few reasons.

I have used a few shotguns and most of them have been fairly large and heavy.  Such as the Benelli Super Nova Tactical.  (Review Coming)  Great gun but large and heavy.  So this was a neat option as I mentioned its compact, lightweight and has a fairly large capacity.  Onto the review, as usual I will go step by step on all the points I want to talk about.

The price for the Dagger Sap6 is not bad. Ranges form $599-$779 for the base model.  I do believe there are a few barrel options a 14″ and 18″ barrel that come with interchangeable chokes.  I have not used any of the other barrels or chokes so won’t comment on them.  They run about $200 per barrel with Remington Chokes.

What Comes in the Box:

I didn’t get a chance to study what came in the box but from what I recall it came in a black cardboard box. Had a decent manual, two 6 round magazines and of course the pump shotgun.  Pretty basic, no extras but for the price not bad.  I like that it came with two magazines.

Out of the Box:

My first impressions of the Dagger Sap6 12 gauge shotgun.  I was excited as it was the first time I had seen such a firearm with its compact, lightweight and great ammunition capacity.  Not to mention it looks cool. 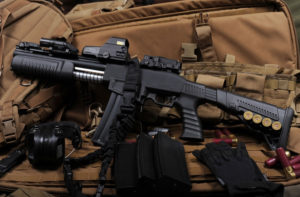 When I inspected the SAP6 the quality seemed pretty good for the price.  Once I started using the firearm and helped clean it I did find a few small things quality wise that could be fixed and may have been as the firearm was purchased about a year ago.

1.)  Front sight.  Comes loose and may fall out.  Its only a small ball sight that helps pin down the Picatinny rail.  I would suggest maybe some blue Loctite to secure it in place.  Problem with that is you have to remove the front site and a retaining screw on the rail to take the firearm apart.  This would have to be done very rarely as it does not need a full takedown oftern.  The actual turning of the sight doesn’t bother me as its a short shot gun so aiming is not a precision thing.  Saying that I do find the gun accurate.  My main concern is that you loose the front site which will make the front of the rail loose. 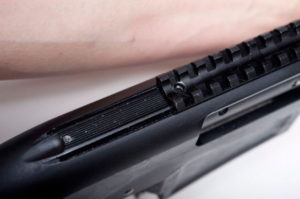 2.)  When taking the Picatinny rail off to take the firearm apart its not hard but putting it back on can be hard at least the one I used.  The rail slides on and off of rails built into the receiver.  When trying to put the rail back on it was very tight and was a bit of a pain to get on.  I think if I would have applied some lube that might have made it easier.

I think the overall durability of the firearm will be decent.  I personally have put around 600 or more rounds through it and the wear and tear is is not bad.  There are a few things I will go into later about the function and reliability. 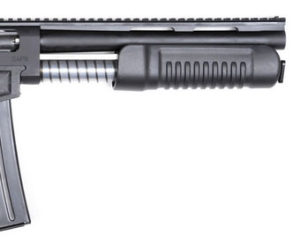 One part of the Dagger Sap6 that is also unique is the pump function.  It has a spring “assist”.  When you pump it, it helps you push forward.  In fact if you pull back and let go it will go forward by itself and chamber the next round.  So in theory it helps you pump faster to allow faster shots. It’s nice but does take some time to get efficient with it.  At least for me.

Some drawbacks.  There is no way to lock the bolt open. You can still load a single round if you wish but it takes some effort.  I could live without the spring but don’t mind it either now that I have learned how to use it. 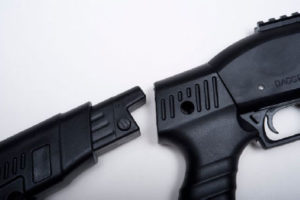 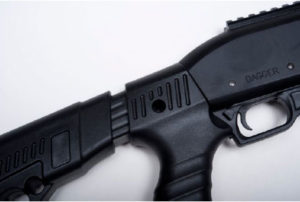 The buttstock is nice I like it.  Its good quality, comfortable, can be adjusted to 3 lengths and is removable.  Removing it I believe makes it a restricted firearm so not something I think you can do legally at least while in use.

One of the neat features of this gun is of course that it takes magazines.  You can currently get either a 6 round magazine or 11 rounder.  I happened to test two 6 round mags and two 11 round mags.  The magazines are made of metal and are good quality.  I believe they are unique to the SAP6.  6 round magazine is around $45 and the 11 round is around $60.  Not cheap but not outrageous.

The 6 round I found with certain loads would allow for 7 rounds to be loaded.  This will be talked about under the reliability section.  I didn’t find any issues with the 11 rounder. 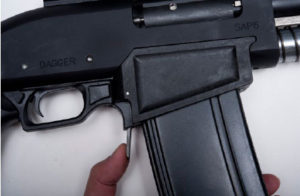 The magazine release is in a good place and is easy to release.  The only thing I would say about it is that I don’t 100% like that you have to push the release leaver fairly hard to get it to release.  But I guess that can be seen as a good feature as well depending on how you look at it.

The grip is great.  Its very comfortable and I personally have no problems with it.

The trigger is crisp and I found it to be good.  I didn’t focus on the trigger as its a tactical shotgun so for what its designed for its just fine.  Not sure what the trigger pull weight is.

The SAP6 has a full length Picatinny rail on top of the shotgun.  You can mount anything you wish up there.  Works as it should.  You can buy a new pump fore-end that also has a small pic rail at the end to mount a flashlight or whatever.

It has two sling mounts one on the bottom of the buttstock and one right on the front of the for-end. 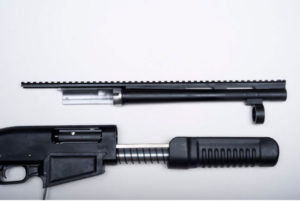 Full take down is not overly hard but can be problematic as mentioned above.  Please read the attached Manual for full takedown instructions:  Click Here

This is a hard one to figure out.  I know that seems strange but let me explain.  First off the shotgun is unique and takes time to learn how to use with proficiency.  So a lot of the errors I am going to explain mostly can be contributed to human error.

When I first shot the gun it was barely used.  It would jam and I would have to remove the mag and a few live rounds would fall onto the ground then put the mag back in.  What I think would happen most of the time is it would not strip out the spent round and would try and load another.  This would happen every 2-3 mags.  Let me explain why I think this happens.

1.)  The spring loaded pump takes time to get used to.  If you mess up the pump process such as short stroke or something like that it can get jammed.

2.)  The gun was new and was breaking in.  The Dagger I have been told does in fact have a break in period.

3.) Most importantly I did not notice until about halfway through my experience’s with the firearm.  The 6 round mag can actually hold 7 rounds.  Not sure if this is common or the same for everyone but I was wondering why it was getting jammed so much and then I counted the rounds I loaded and low and behold the 6 round mag accepted 7 rounds!  This may seem like a good thing but not in this gun.  If you put the extra round it 30% of the time it will jam.  I think due to the extra round messing up the extraction and reloading process.  Maybe the 7th round causes friction or the springs in the mag are to compressed.

4.)  Low brass randomly will not extract.  This happens maybe every 100 rounds.  But does happen.  This is why I find this problem confusing as it could be human error by not pumping the action properly.

So after using the Dagger over a period of time things got MUCH better.  After the break in period, not overloading the mags and getting the pump action down I would say 95% of the time there are no problems.  The only issue I get about every 100 rounds is the failure to extract a round this does happen but ONLY happens with cheap low brass ammo.  I haven’t had it happen with high brass such as slugs.

As I said its a difficult one to figure out.  In the end if I owned this firearm would I take it over lets say a Benelli Super Nova Tactical or Mossberg 500.  The answer is I don’t know.  I have very few problems when I get a chance to use it now but the beginning was rough.  The size makes me like it and amount of rounds you can put in with the mags are great reasons to take this over other shotguns.

There are also a few other options on the market now in terms of the compact shotgun category. I will have to get my hands on a few and will update when I try them.

It runs 2 3/4″ – 3″ shells.  I ran a verity of makes and sizes of rounds through the gun.  From high end slugs to low end target load.  As mentioned it runs everything but I did get some failure to extract every now and then from cheap low brass ammo.

Being as the Dagger SAP6 is so small it does have a bigger kick then other larger shotguns obviously.  But its very manageable and since I shoot shotgun more than any other type of firearm I don’t find it uncomfortable and enjoy shooting it.  But I like guns with a kick.

Obviously it’s a short barrel shotgun so your not going to be shooting over 100 yards with great precision.  I found it to be fairly accurate and actually can skeet shoot with it.  Not great for that but did a decent job.

In the end if I purchased this gun would I be happy and would I buy it now.  As of today I would definitely consider it.  There are some other options out there now that I would have to look at before I handed over my cash for the Dagger SAP6 12 Gauge but it would be on my short list for sure.  Cool gun and really do enjoy it when I get a chance to shoot it.