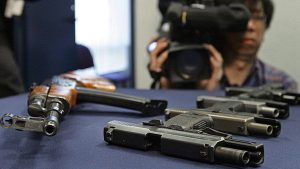 I came across this video while doing my daily “research on firearms” and thought I would watch it.  It talks about firearms related murders in Canada, mainly in Toronto and what is causing it.  It was produced by Global News so I was ready for a bunch of anti gun garbage, which of course there is some in the vide0.  BUT for the most part it focused on ILLEGAL guns (mainly handguns) are the cause of the majority firearm related deaths in this country.  In the video they interviewed people who LIVE in areas where the crime is high and are in the lower income areas where gangs and drugs are everywhere.  They themselves say its not the gun its the economics, mental health and social issues that cause these types of problems.  The people interviewed say government needs to focus on helping to educate and get people out of the cycle and poverty.  They don’t blame the guns so why does the media, government and anti gun groups?  The report even states for the last 50 years gun violence is on a steady decline.  Statistics Canada even proves this.  According to this report  (at the time it was aired) there is only one place for these troubled youth to go in Toronto for help and counselling, only one.  Instead of funding more places like the one in the video they spend thousands of dollars on cameras on the streets and what did that do?  Nothing.  Do a better job at preventing illegal guns from being brought into our country and provide more social and mental health support.  That will bring real change.  Not an easy task I am sure but passing laws that do nothing is just plain silly.

To me the video just reinforces the reasons why gun control in terms of LEGAL gun owners is a farce and does absolutely NOTHING to make our streets safer.  Trying to take firearms away from or implement more laws on a group of individuals who are some of the most law abiding people in the country is outrageous and obviously would not affect the crime rate in this country.  Making people who follow laws, follow more laws or take firearms away from them doesn’t seem like a logical way to fix a problem that their not apart of does it?

Its a long video and at the beginning it seems to take the usual path of ban all guns….. but keep watching and I feel the video makes some good points and tries to get to the real point of the matter.  At least the way I saw it.  I could go on forever about this topic so just watch the video and let me know what you think!