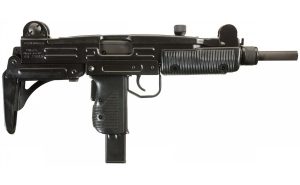 A Quick History of the UZI Machine Gun

The UZI Machine Gun is one of the most popular machine guns ever made, used by numerous countries and their special forces. It is one of the first firearms to introduce a telescoping bolt design, it is lightweight, accurate, and has enormous fire power. More than 2 million units have been sold, and it’s been used in countless Hollywood movies throughout the years. But what is the history behind it and how was it all started?

The notorious UZI Machine Gun was developed more than 60 years ago by German-born Israeli engineer and gun designer Major Uziel Gal. In 1949, the Israeli Chief of the General Staff, Ya’akov Dori, announced the army was looking to replace the Sten gun, and just one year later, in 1950, the first UZI prototype was revealed. It outperformed its competitor the Kara, developed by Major Chaim Kara, and was the gun of choice for the Israeli army due to its reliability. In addition, it was also compact, lightweight, easy to assemble and extremely cost-efficient. It was patented under the name UZI Gal in 1952, and mass production started in 1954. The first order was made by the Israeli ordnance corps, requesting 8,000 guns along with 80,000 magazines.

Usage across the World

In Europe, the UZI Submachine Gun was tested in 1955, along with the German Schmeisser, English Sterling and Swedish Carl Gustav. All other guns were disqualified due to low results, while the UZI received 1529 points out of 1900. It was exported to more than 90 countries around the world and was used by many armies, elite commando units, and security personnel. It was reliable, lightweight and had great firepower. However, it became really famous amongst ordinary people when a camera caught one of President Ronald Reagan’s bodyguards pulling an UZI from his jacket during the 1981 assassination attempt. In one version or another, it has been used in numerous countries around the world, including Italy, Germany, France, the USA, Australia and Iran, amongst all others. 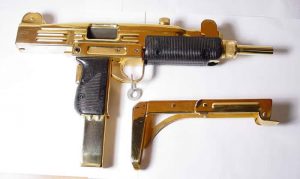 The UZI Submachine Gun has been in the market for more than 60 years now, and its manufacturer, Israel Military Industries (IMI) never stops upgrading and developing it. It has created numerous other versions, including the Mini and Micro UZI machine guns, which are shorter than the original model, as well as the UZI Pistol, which is a semi-automatic version. In addition, some fairly successful foreign copies of it were made in other countries, such as the Croatian Strojnica ERO and the Chinese Norinco M320.