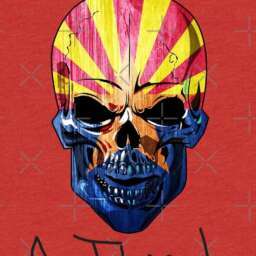 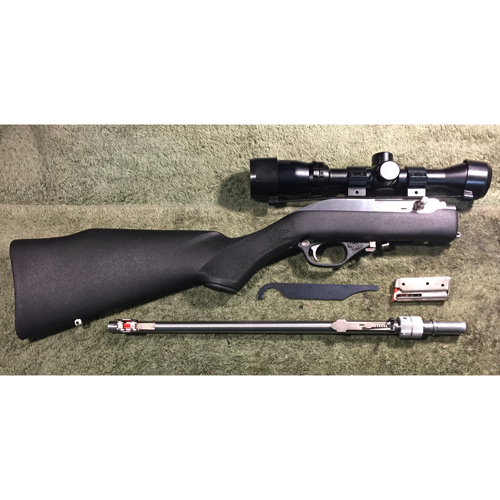 It has taken me some time to get around to doing a review on the Marlin Papoose 70PSS.  I have been shooting this off and on for about year now and have found some good and some bad things about this .22LR takedown rifle.  All technical specs provided by Marlin can be found at the bottom of this review.  As always I will not ramble on and jump right into the review as its going to be long enough as is.

Included in the Box:
The Papoose 70PSS comes with a manual, cloth carrying case, 7 round magazine and wrench to tighten the barrel to the receiver.  I like the carrying case it makes it convenient and easy to grab for range days. 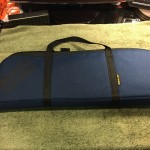 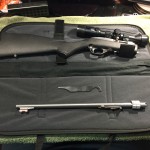 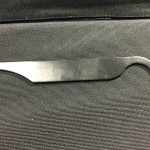 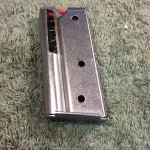 Construction:
The Marlin Papoose has been around for at least 8 years and maybe longer.  This firearm was purchased by my mother about a year ago when she got her PAL so its a new manufacturer date not an older build.  The design itself has not changed but as most of us are aware quality can change over the life of a product.  I have heard quality issues occurring in some Marlin products since they were purchased by Remington in 2008.  Saying that I do not find this firearm to be cheaply made considering its a .22LR rifle.  There are some very cheaply made .22 rifles on the market and I would say this is a good quality firearm.

Issue One:  Really stiff and almost not usable trigger after slightly over tightening screw (pic above) after reassembly.  Like I mentioned this is not a huge issue but something to take note of and frankly I do think it should happen unless you absolutely reef on the screw.  Once I figured out what the issue was it was easy to fix and has not happened again. 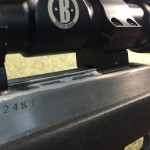 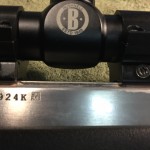 Issue Two:  The scope mounting grooves on the top of the rifle (pics above) are not ideal.  They are hard to get scope mounts that actually hold the scope in place.  We have had nothing but trouble with the scope coming loose from the built in rail on the Marlin.  Usually after shooting only a hundred rounds or so it would start to loosen.  I even put blue Loctite on the screws and between the mounts and the groves on the mounting rails on the rifle with no benefit.  As you can see in the pictures above the Loctite stained the metal.  I am sure it will buff out but still a pain in the butt.  I think we will be trying some different mounts in the future to see if we can fix this issue.  I can probably drill and tap and put a pic rail on the top as well.  But that requires work.  So just a word of warning make sure you find the right mounts for this firearm.  If we find a good one I will update this review with my findings.

The overal fit and finish of the Papoose is good we didn’t find any burs or rough areas on the receiver or stock.  Everything seemed to be well machined. 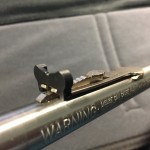 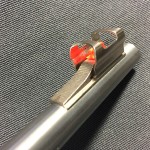 Sighting:
As mentioned above it comes with groves to mount a scope on.  The “iron” sites it comes with are easy to use and you can adjust the rear sight for elevation. The site itself can also be flipped down for storage so it does not catch on anything or if you don’t wish to use it.  The adjustment on the rear sight is very stiff but thats a good thing.  I had to use the handle of my knife to push the sliding metal piece that rises and lowers the rear site.  Not a big deal as you don’t want your sight moving easily anyway.

Front sight is nice and bright.  It does not have much adjustment capability as far as I can tell.  But it does have a little room to adjust the site post left or right.  The front sight didn’t need to be changed out of the box.

Buttstock & Forend:
The buttstock is made from a Monte Carlo black fiberglass-filled synthetic and is light weight and impervious to weather.  I am happy with the buttstock on the Papoose and don’t see anything that needs to change on it.  Its comfortable and I can get a good cheek weld on it.  It also has a swivel to attach a sling to. 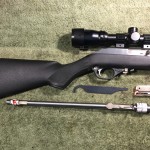 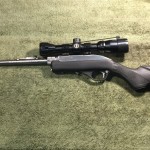 The forend is well made but very short.  The short forend is because of the way its designed as a takedown model.  Take a look at the pictures above and you will see what I mean.  This is not a drawback to me as the design is made to be light, compact and not for competition shooting.

Charging Handle:
The charging handle on the Marlin 70PSS is easy to get ahold of and its made of metal and should last a long time.

Action & Gas System:
The Marlin Papoose has a blowback gas system.  Its a semi-automatic. The action is a sturdy piece of steel.  It ejects to the right.

Extractor:
The bolt in the action has 2 extractors.  We have had some issues with the cartridge no being ejected.  I do believe that was the ammo being used.  More about that below.

Magazine Release:
The magazine release is metal.  Its a little stiff and not in the most ideal location.  I have to use my left hand to push the magazine release button and/or use my right hand to remove the magazine.  This is not an AR15 its a .22 takedown Marlin so speed reloads are not something we need to be concerned with.  At least in my opinion.  Saying that its not hard and you do get used to it. 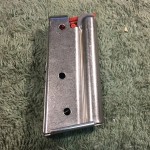 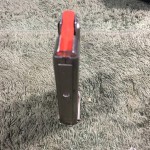 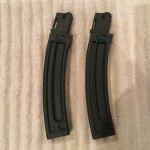 Magazines:
There are a few issues to talk about here.  The Marlin Papoose comes with one 7 round magazine.  Its all metal and has worked very well and honestly I only remember having one possibly two issues with reliability with this magazine.  For a 22 rifle this is great.  The problem I have is Marlin only produces 7 and 10 round magazines.  I wish they would make a large capacity magazine of their own.

I also used two Promag 25 round magazines for the Marlin 795.  The 795 is the same as the Papoose its just not a takedown model.  These magazines had a bunch of issue with feeding and extracting with certain types of ammo.  BUT if you find the right ammo they work well and are worth purchasing.  I will talk more about ammo below.

Safety:
The safety on the Marlin is made of metal and is very easy to access.  No problems or issues with the safety.

Ammunition:
We ran a wide range of ammo through the Marlin Papoose and with the stock 7 round magazine everything ran well.  With the ProMags cheaper ammo such as the Remington Golden Bullets and even CCI’s had issues and CCI .22 ammo is know to be a decent round.  We ran hollow point ammo, mini mags….  The best ammo we found for the 3rd party magazines is Federal Target Ammo and Winchester M.22.  MARLIN MAKE A 25 ROUND MAGAZINE!

Cleaning/Field Strip:
Field strip on the Marlin Papoose is not hard.  Again as mentioned in the construction section at the beginning of this review you have to make sure not to over tighten the screws when re-asembling the firearm.  Please watch video above.

Accuracy:
Accuracy is a hard thing to judge as it depends on so many factors.  I do think this rifle is accurate when using decent ammo and of course the shooter does their job.  Even with lower quality ammo it still hit small targets fairly consistently.  We also had the issue with the scope coming loose so that made things a little harder to judge.  With the iron sites it was hitting well.  The video above is not great quality and was just some footage I had from one of the range days my mom and I had.  But you can hear some comments about the magazines messing up in the footage.

Reliability:
We all know that .22 rifles typically are not 100% reliable.  This is due mainly to ammo I believe.  .22 ammo is very dirty and unless you spend extra for more quality .22 ammo you will almost never achieve 100% reliability.  As I have mentioned previously in this Marlin Papoose review it runs great with its stock magazine with only a few issues with hundreds of rounds through

it.  It didn’t matter what type of ammo was used.  With the 25 round ProMag it was very picky with ammo.  The ProMag magazines liked Federal Target and Winchester M.22 it did not have many issues while running this ammo.  The other ammo mentioned in the ammo section of this review would have a minimum 1 miss feed on every 25 round magazine.  It probably averaged at least 2 per mag.  The nose of the bullet would get jammed on the feed ramp.  I notice on cheap .22 ammo such as the Remington Golden Bullets that the bullet was fairly loose in all the cartridges.  In the more pricey ammo the bullet was not loose and think that prevented the round from hanging up on the feed ramp.  I even polished the feed ramp to try and fix this and no dice.  Saying this though keep in mind that the Remington and all other ammo did not cause issues with the factory Marlin magazine.

Final Thoughts:
So is this worth the $400 price tag?  Absolutely.  I didn’t touch on the many uses in this review for the Marlin Papoose 70PSS.  Its a great gun for plinkers, people such as my mother who have some back and hip issues because its light and easy to carry when packed up.  For new or young shooters its a perfect way to start again because its light and .22 doesn’t have recoil.  Its easy to acquire your targets due to the bright front sight.  Its wonderful for a survival rifle again because you guessed it its light and the takedown capability is perfect for such situations.  It would fit in your hiking pack, on your boat, taking it camping… and it only weights 3.25lbs or 1.47kg unloaded without a scope.

The negative issues mentioned earlier basically came down to ammo and the ProMag magazine.  The scope mount issue is something to consider but I know it can be remedied with better mounts or a pic rail added.  I do wish Marlin would pre-drill for pic rail or have a better mounting system out of the box.  All in all I would purchase this rifle for myself without hesitation.  Please comment below if you have any suggestions or if you think I missed something.