Quick History of the Mosin–Nagant

The Russian Mosin-Nagant rifle was developed in 1891 following extensive testing on repeating, bolt-action rifles. It was designed by Sergei Ivanovich Mosin, a Russian Captain, and Leon Nagant, who was a Belgian designer. The assembly of the Mosin rifle was done at Russian arsenals found in Tula, Izhevsk, and Sestroryetsk. Since domestic production of this rifle started off very slowly, it was contracted out to a more efficient French arms firm called Chatellerault, which ended up building more than half a million rifles.

During the First World War, other contracts of mass producing the Mosin-Nagant rifle were issued to American companies Remington and New England Westinghouse. Due to the Russian revolution at the time, the contracts of supplying more than 2 million Mosin rifles were never fulfilled. As a result, the rifles were now sold to the American public and also used by the American government for their military training. The Mosin sniper rifle was widely used in WW1 and can be found with several markings depending on which European country either purchased or captured them.

The two main cavalry rifles that were based on the Mosin rifle were called Dragoon and Cossack rifles. They are at least 2 inches shorter than the main M91 rifle. The Dragon variety had a bayonet attached while the Cossack riffle did not have a bayonet. Today, finding a Cossack rifle is very rare, and they are easily recognisable by their “Ka3” etched on the chamber. The Mosin rifle also has several unique variations, including a Polish 8mm conversion and various other bayonet and sling mounting systems. Moreover, there were several post-war rifle conversions, which are regarded as highly unsafe compared to today’s standards. 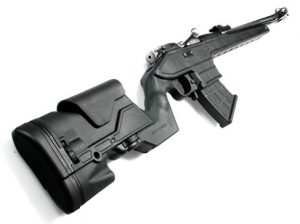 In 1930, several updates were added onto the Dragoon version of the Mosin sniper rifle, thus creating a whole new rifle known as the M91/30. Some of the major changes included front and rear sights, a round receiver and split barrel bands that were held together by springs. Most of the Mosin rifles dated before 1930 use the distinctive M91/30 design and their production was completed in 1944. This design was very significant as it was regarded as the best foundation for sniper rifles in the 30s.
The M38 version of the Mosin-Nagant rifle was developed in 1938, and it featured a new 40” carbine. This version did not include a bayonet because it was meant for usage by rear troops. After the end of the Second World War, the Soviet Union chose to share some of its weapons technology resulting in many different distinctive variations of this Mosin sniper rifle.