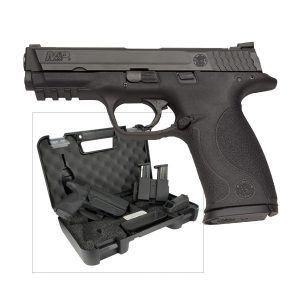 Smith & Wesson is one of the most recognisable names in the firearms industry. The company has a very interesting history. To start with, it got its name from its founders, Horace Smith, and Daniel B. Wesson. The former learned the trade while working at the National Armoury located in Springfield, Massachusetts, USA. Wesson’s experience in making firearms came from being an apprentice to Edwin Wesson, his brother and top manufacturer of pistols and target rifles during the 1840s.

Smith & Wesson formed the company in 1852 with the goal of making and selling a lever action repeating gun that can be fed with a built-in cartridge. However, their first pistol venture was not a success, and their company suffered from financial difficulties two years after they have founded it.

From S&W to Winchester

Because of their financial problems, Smith & Wesson had to sell the company to Oliver Winchester, who is a shirt manufacturer. In 1866, Winchester used the original S&W level action design to launch his own line of pistols under the Winchester Repeating Arms Co.

In 1856, Smith and Wesson created their second partnership to manufacture a small revolver that will use the Rimfire cartridge that the two have patented in August 1854. The result was the first revolver that utilises a fully self-contained cartridge. They got the patents for the revolver to ensure that no other company can produce a cartridge revolver, and that’s how the young company became one of the top firearms manufacturers today.

The two handgun innovators realised that they need a new design in order to remain competitive when their patents expires. And that’s why they continue to innovate and create new designs. In 1869, they came up with a new design that was introduced in the market the next year. The S&W Model 3 American was the first large calibre cartridge revolver on the market. It also made the company the top manufacturer of handguns in the world.

The Model 3 American was used by the United States Calvary, which both 1,000 units and used on the Western Frontier. The Russian Imperial Government also bought revolvers from S&W for their army. 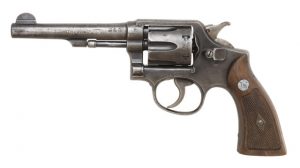 The company’s most successful product was the .38 calibre Model 10, which was introduced in the market in 1899. The revolver was later known as the .38 Special. It was used by the US military and became the sidearm of choice for police officers across the United States. At present, the gun remains a popular option for home defence and a favourite among gun enthusiasts across the globe.